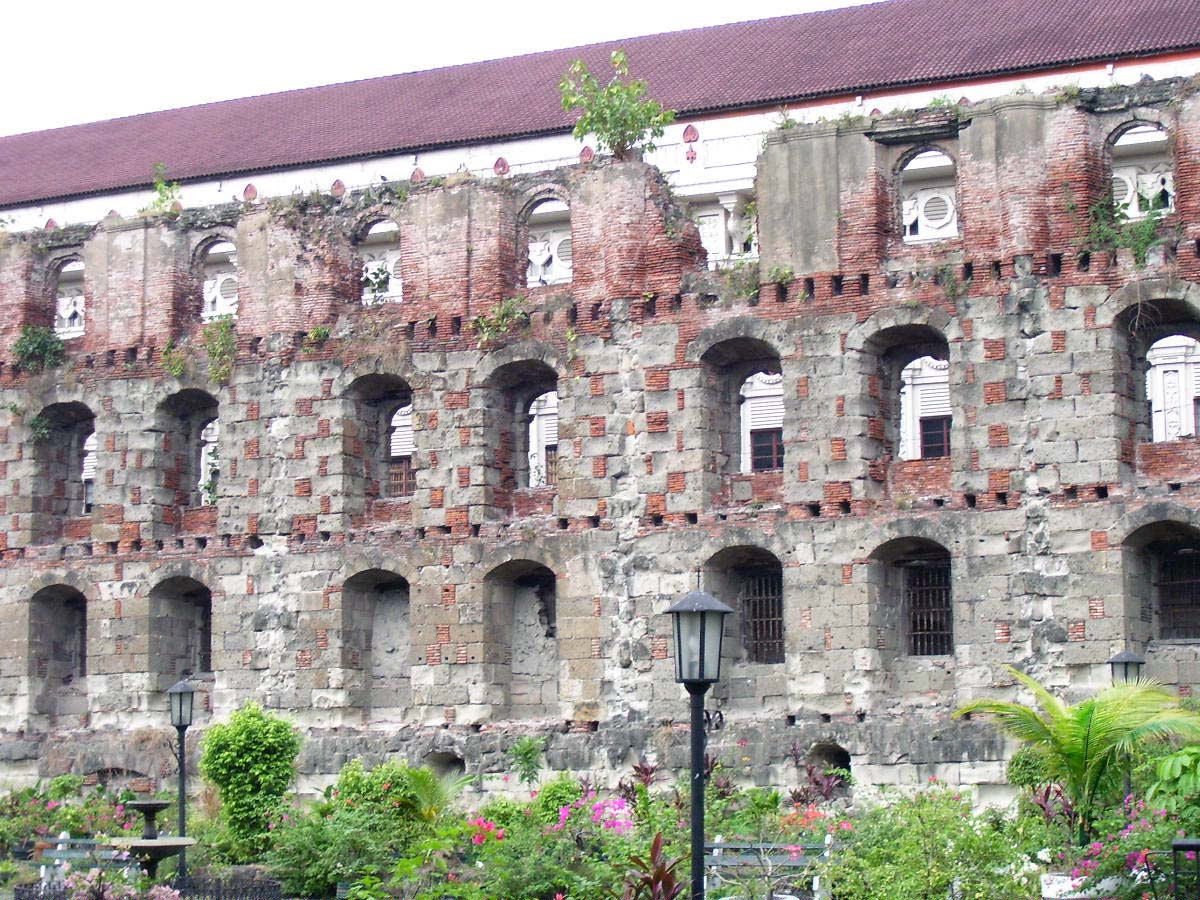 I had the pleasure of visiting San Agustin Church Museum four times, yes, four times. Still I liked seeing the different areas in the museum. But the best part I would say is Fr. Blanco's garden (see the picture) with the ruins and the plants and flowers that you find there. And for some reason, a sense of tranquility everytime you gaze at the view in front of you.
See my flickr account for more photos. (Not that many though)

These additional information I got from the brochure.

1. San Agustin Museum
The monsatery was originally used as the living quarters of the Augustinians, classrooms, refectory, vestry, library and infirmary.

It was destroyed by the British forces in 1762, by the American soldeirs in 1898 and during the Japenese and American liberation war in 1945.

The Monastery was converted into a Museum in 1973 as teh Halls were restored.

2. Entrance / Bell
One gains entrance to the museum through the old porter's lodge where a 3,400 kilogram bell stands. It was taken down in 1927 from the belfry damaged by the earthquake of 1863.

3. Sala Recibidor
The first hall is the SALA RECIBIDOR, formerly a classroom. It houses the San Agustin Ivory Collection of the late Luis Ma. Araneta, and a magnificnet 18th century wooden retablo of the Intramuros Administration.

4. Corridors (First Floor)
The four corridors of the first floor of the museum exhibit oil paintings done by Filipino painters Enriquez, Fuster and others in the earth 20th century. The paintings portray saints and celebritise of the Augustinian order.

Left turn to
5. San Agustin Church
The present church was built in 1587 by Juan Macias, a soldier and architect. Construction was completed in 1606. The San Agustin Church has a vaulted ceiling and dome painted by two Italian artists, Alberoni and Dibella. The style is predominantly baroque. It is the oldest stone church in the country and the lone survivor of World War 2.

Visit the tomb of the founder of Manila, Miguel Lopez de Legazpi and admire the 19the century chandeliers, the pulpit, the side chapels, the tombstones on the flooring and the three-dimensional paintings done in 1875 at the ceiling of the dome.

6. Sala de la Capitulacion
The old VESTRY (first floor) was used in the earlier times by the priest to dress up for liturgical services. Governor Fermin Jaudenes drafted here the terms of surrender of Manila to the Americans in 1898. The room now displays an assortment of church artifcats, episcopal paraphernalia, statues and altar silver utensils.

7. Sacristy
The old SACRISTY (first floor) marked by a large wooden door and frescoed walls of Aztec inspired influence showcases a host of CHina chestrdrawers, candlesticks, statues and paintings. A large polychomed 16th century reredo altar with 22 gold niches at the center of the hall, the original retablo of the church carved by Juan de los Santos in 1650, rivet one's attention.

8. Refectory - Sala Profundis / Crypt
The refectory was the former dining room of the priests. The anterefectory was called Sala de Profundis, used by the priests to say grace before and after meals. It was converted in 1932 into a mausoleum for the Augustinians and later on for other FIlipino families. A monument recalls the victims of the Japanese occupation (1942 - 1945). Niches are now available at the new crypt annex.

9. Corridor with Carrozas
Displayed here are 18th Century "carrozas" used during the religious processions, whether inside or outside the Church.

To the Second Floor
10. Main Staircase
The main staircase, made of 44 pieces of Chinese granite stones brought in Canton in 1780, is topped by a perfectly round stone dome covered with light bricks, with six rectangular windows. Here hang 18th and 19th century paintings.

11. Corridors (Second Floor)
The four corridors in the second floor burned in 1945, have been recently restored to their original form. The walls are plastered and painted in white, as they were originally, following the Mexican influence.

12. San Pablo Hall (First Hall to the right)
This hall, commonly known as "Claustro de San Pablo" was destroyed in 1945 and restored in 1993. The table used during chapter meetings, the "Caja de Obras Pias" the model scale of San Agustin Church and Museum and old paintings are on exhibit here.

13. San Pablo Hall (First Hall to the Right)
The hall housed formerly the cells of Major Superiors of the Augustinians in the Philippines, the Prior of the monastery and other officials. It was destroyed in 1945 and restored in 1993. Hanging on the walls are photos of churches built by the Augustinians from 1565 - 1898. Also on exhibit are Filipino Grammars and Dictionaries written by the Augustinians.

14. Porcelain Room
Exhibited here are shards excavated at the San Agustin Complex which evidence the China-Philippine trade. Equally revealing are the heirloom jars from Southeast Asia, a collection of Mr. Ermelo Almeda.

15. Former Biblioteca
This room formerly the Biblioteca of the Augustinian Monastery destroyed during World War 2 was restored to function as a temporary Exhibits Hall.

16. Oratorio / Antechoir / Choirloft
Here you can see a crucifix dating back to the 17th century, the 68 choir seats carved in molave with fine inlays, the big lectern with "cantorals" and the 18th century pipe organ to which is attached the composes of such renown as the Augustinians, Father Arostegui and Pakil-born Marcelo Adonay.

17. Church Vestments
This room showcases 17th and 18th century vestments and capes from Spain and China worn by officiating priests for church services. The capes, chasubles, dalmatics, altar cloths, and frontals are embroidered and decorated with gold and silver metallic thread. Some are painted with intricate designs. Vestments in various colors are used during different liturgical seasons. Some of these vestments were conserved to prevent deterioration.

18. Passage to Fr. Blanco's garden
Father Manuel Blanco, "The prince of Botany," pioneered in the study of medical plants in the Philippines. WIt his book, "Flora de Filipinas," published in 1883, San Agustin reached its peak in the area of cultural scientific achievement.
Fray Blanco carried out most of his experiments at this monastery garden which was destroyed in 1945 and restored in 1991.
The bronze monument of Fr. Blanco was made by Amado Castrillo.


powered by performancing firefox
Posted by pinyapol at 1:23 AM

All Paths Lead to You

All paths lead to you, where e'er I stray;
You are the evening star at the end of day.

All paths lead to you, hill-top or low;
You are the white birch in the sun's glow.

All paths lead to you, where e'er I roam;
You are the lark-song calling me home!

pinyapol
What can I say, I'm crazy...hehehe. What's new eh? At least I'm crazy enough to recognize and admit it...